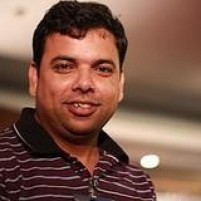 With more than 16 years of work experience in core technology strategy, research & development and consulting, Ajey has advised on & built better business technologies for various clients across the globe.

Ajey started his career at National Centre for Software Technology as Technical Associate and later as Staff Scientist. He was part of project implementing multilingual solution on Microsoft windows platform and later lead Indic language version of OpenOffice.

Ajey spent the next 11 years at ThoughtWorks rising through multiple roles like Software Developer, Build & Configuration Manager, IT Manager before becoming the Head of Global IT Operations and eventually the Head of Technology for ThoughtWorks India operations.

Prior to moving to Head of Technology Role, Ajey headed Global IT operations for ThoughtWorks. In his role Ajey was responsible for overall IT operations and technical leadership for executing internal projects for ThoughtWorks. His overall responsibility includes both technical and operations side of IS such as security, VPN, budgeting, resources, data centre operations, people management and internal project executions. He managed the global IT team of 25+ people in 22 offices across 6 countries.

Ajey was also a member of Technology Advisory Board of ThoughtWorks and part of the office of CTO. In his last stint, Ajey started Snap CI in ThoughtWorks, helped ThoughtWorks Studios’ products to move to cloud and software as a service.

After ThoughtWorks Ajey served Hoppr – a location based mobile app providing local service information to consumers, as Chief Technology Officer, where he was responsible for product technology vision, team growth and product technology roadmap, where the technology team’s highlights included scaling product for up to 1 million daily check-ins and 70+ million users.

Ajey is passionate about Continuous Delivery, DevOps, Visualization, Cloud, Virtualization strategies, Networks and Security. He speaks and writes about these subjects.

Ajey helps run RubyConf India, DevOpsDays India, and RailsGirls India. Ajey is part of the Innovation and Technology Trust, a not-for profit organization responsible for running these conferences and committed to promoting technology in India.