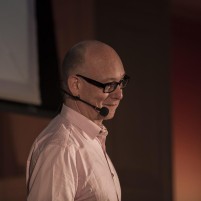 Barry has been working in the world of mobile apps since 2009. For about half of that time he owned and ran a mobile games company - they made the official app for the Transformers 3 movie! Good game, not such a good movie. Before the iPhone was invented he was an Oracle ERP consultant, and worked for a while in investment banking but is trying to forget about that period.

In 2012 he was, hilariously, picked as one of the 100 most creative people in the UK, along with Jony Ive - having an arts degree is not all bad it seems :)

Since moving to Australia he has worked at Aconex, Itty Bitty Apps, Cricket Australia, and now Drawboard.