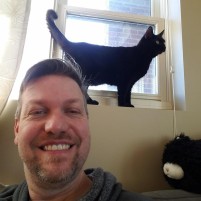 Corey Haines started programming at the age of 10, on a computer his father (also a programmer) bought for him. He played lots of computer games, and when he couldn't win the games, he learned to read the source code and edit the outcome. These "winning games" were his first software programs. He continued to hack, grew up, and began working as a professional software developer

After 12 years of coding for money, Corey said: "Enough!" - and went on a year-long, Journeyman pair-programming tour. Traveling the world, coding for room and board, he spent his time teaching, learning, and living. Imagine a bee that cross pollinates software knowledge instead of flowers; that bee was Corey. And instead of wings, he had a little red car.

Since that tour ended in 2009, Corey has focused his attention on helping developers improve their fundamental software design skills through the use of focused-practice events, such as coderetreat. He also consults for business owners, helping them get the most value out of their software strategies. When not on the road, he spends his time building projects and products.