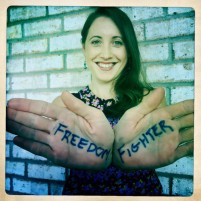 Thompson works as the Exectutive Director of Free for Life International, based in Nashville, Tennessee. Free for Life International focuses  its efforts to end modern day slavery, specifically sex trafficking in Nepal and India. Thompson's background is in women's socioeconomic development in Central America, and gender equality research in the Middle East.  She holds a Master's in International Development focused in gender, from Middle Tennessee State Univertsity. Thompson's primary passion  to continue in the field  of women's development and empowerment through sustainable measures.