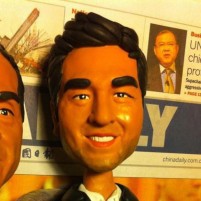 Kavin Bharti Mittal is the Founder and CEO of Hike Messenger, the only communication app built out of India. With over 100 million users exchanging over 40 billion messages per month as of January 2016, Hike is by far the second largest messaging app in the country.

Kavin launched Hike in December 2012 and since, have had investments in the company from Bharti, SoftBank, Tiger Global and some of Silicon Valley’s top tech veterans. With a focused India strategy, Hike Messenger is a new kind of messaging app that simplifies how people connect with others and will change the way they interact with content and services on mobile. As someone whose passion lies in creating top class teams and building products for the mobile first Indians, Kavin believes that messaging will do for mobile what the browser did for the desktop times a 100.

Prior to Hike, Kavin founded AppSpark at the age of 20, to explore possibilities of services on mobile applications. In 2009, AppSpark launched ‘Movies Now’ in partnership with movietickets.com, the first ever movie ticketing app on the iPhone that would go on to change the way consumers bought movie tickets on the go. Later, Apple recognized Movies Now as 'One of the 10 Essential Movie Goer Apps' for the iPhone due to its focus on user experience and design.

Kavin completed his Masters in Electrical and Electronics Engineering and Management (M.Eng.) from Imperial College, London. During his summer breaks at college, he interned at some of the world’s leading companies such as McLaren Racing, Google and Goldman Sachs.