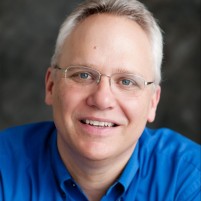 Richard Sheridan is the CEO, Chief Storyteller and co-founder of Menlo Innovations.

Rich knew at 13 years old what he was going to do the rest of his career when he typed in a two-line program into a Teletype and the computer came back and typed back “HI RICH”. He was hooked. A year later, after having typed the entire Baseball Register into the computer, he won an international gaming contest for what would now be termed Fantasy Baseball. The amazing thing is that this all happened by 1972.

In 1973, Rich landed his first job as a programmer, creating the first email system at the Macomb Intermediate School District, a decade before the term email would even be close to a household word. He couldn’t believe people would pay him to do something he just loved to do as a hobby.

The Slide from Joy to Fear

He went on to obtain a Bachelor’s degree in computer science from the University of Michigan and then followed that by earning his Master’s degree in computer engineering. After graduating, he worked his way through a number of Ann Arbor technology companies, ending up at Interface Systems. At the midpoint of his career rise, he wanted out. He no longer experienced the joy that had first drawn him to programming as a kid. His work life was filled with weekends away from family, disappointed colleagues and projects that were always in trouble.

After being promoted to VP of Software Development, Rich was inspired to pursue a lasting change in the organization and restore the joy he initially found in his job and industry. His investigation led him to different books, videos, and methodologies that opened his eyes to a new approach for running his team. He was delighted to see lasting change within his team. By early 2001, however, the Internet bubble burst and Interface System’s new Silicon Valley parent company shuttered every remote office it had. The beautiful, high-flying experiment that Rich and his team had run was over. For the first time in a thirty-year technical career, Rich was without a job.

Rich knew that he had been on to something at Interface Systems. He had learned how to build a great team with a joyful culture. So he decided to do it again by starting his own company with three partners. On June 12, 2001 Menlo Innovations LLC was born. He and his partners decided that the company’s purpose would be to bring joy to the world through software, and to teach this method to others. Rich was featured on the cover of Forbes magazine in 2003, sharing his “hire yourself” story with the world.

Menlo has gone on to win the Alfred P. Sloan award for Business Excellence in Workplace Flexibility for eight straight years and has earned five revenue awards from Inc. magazine. Rich spends the majority of his time sharing the Menlo Way through teaching classes, leading tours, speaking at conferences and mentoring entrepreneurs in the community and sharing joy!