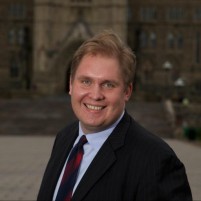 Treasury Board Secretariat - Government of Canada

Ryan Androsoff is an international expert on digital government and a passionate advocate for the increased and effective use of social media, collaborative technologies, and open data in the public sector. Ryan recently completed a 1-year assignment with the OECD in Paris, France where he was involved in a number of digital government projects including reviews in Northern Ireland, Slovakia, and Morocco as well as open data capacity building in the Latin American and MENA regions. Since 2010 he has served as a Senior Advisor in the Chief Information Officer Branch of the Government of Canada's Treasury Board Secretariat. His work at Treasury Board Secretariat has included leading the development of the first government-wide social media policies, managing the GC2.0 Tools team responsible for the Government of Canada's internal on-line collaborative platforms (GCpedia and GCconnex), and advising senior management on policy innovation and the use of digital technologies in government.

Ryan’s career has also included serving as an advisor to Canada’s Minister of International Cooperation at the Canadian International Development Agency (CIDA), and working at the World Bank in Washington, DC on initiatives to promote results-based management in international development. Ryan is a graduate of the Harvard Kennedy School of Government in Cambridge, Massachusetts where he earned a Master in Public Policy degree. His research at Harvard focused on “Government 2.0” and the implications for governments of online citizen engagement. Ryan also has an Honours degree in Public Affairs and Policy Management from Carleton University in Ottawa. He was born and raised in Saskatoon, Saskatchewan, Canada.