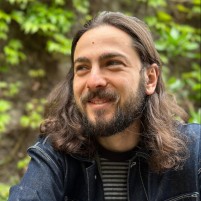 I'm a software developer from Auckland, New Zealand. I started learning Haskell on my first job straight out of university and couldn't get myself to stop using it ever since.