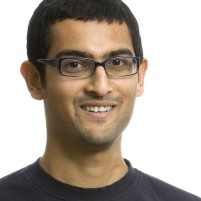 Please see my LinkedIn page:https://www.linkedin.com/in/viralbshah and my GitHub page: https://github.com/ViralBShah